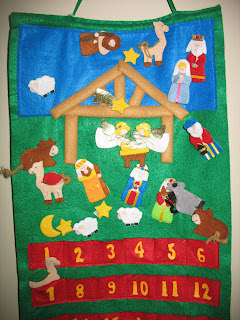 On Christmas Eve I sat down with the Blonde Bombshell (3 and a half years) and read her the story of Christmas.  I explained that Mary and Joseph were having a baby (she understood that) but that the baby was actually the son of God, not Joseph (a small wrinkling of her forehead but no comment).

I explained that they had to travel a long way on a donkey because there were no cars ("no cars?") and when they got to Bethlehem there was no room at the inn ("it's like a hotel") so they had to stay in the stable with the animals, which she though was great ("I like cows, Mummy").

I told her that when Baby Jesus was born, although he was only a little baby, everyone knew he was very special and people came from all over to see him.  We looked at pictures of the shepherds and the wise men, and all the angels flying in the sky ("are they are white fairies, Mummy?").

It was easy to establish that Christmas was really a celebration about the birth of a baby called Jesus.  The Bombshell is all about birthdays, she tries to have one at least every month.  It was difficult though to segue our conversation, which had been going well up that point, into Santa and his reindeer.

"So is Santa Baby Jesus' friend too?"

I didn't want to cheapen the Christmas story with a lie, but I could not figure out how to explain how Santa with all his jollyness and modern day festive bling fit into the picture.  Was he a modern day Wise Man bringing gifts to modern day children? What did they teach me in school about St Nicholas? Think, Shannon, think!

In the end I kissed the top of her head and said "that's right, we are all Jesus' friends".  Good save Mum.

Then before bed we got some carrots out for the reindeer and a chocolate or two for Santa.  Then it was time for the advent calendar - a felt one with a little nativity character each day. Being the 24th, the final character was Baby Jesus in his manger.

"Look Mum, it's the Baby Jesus!  The Baby Jesus is beeeyoootiful.  The angel says the baby is back and all the other children come to see the baby.  The angels are Baby Jesus' friends".

I couldn't have said it better myself.

Merry Christmas everyone.
Posted by Shannon Meyerkort at 9:01 AM