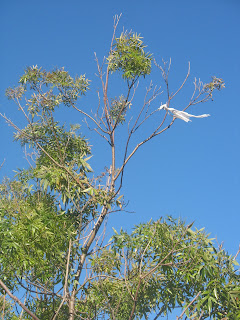 This is not just a remnant of a plastic bag stuck in a tree.  This is actually a remnant of my former life: my life of being pregnant, of being ridiculously sick, of being a mother of merely two, a woman whose backseat doesn't look like this. 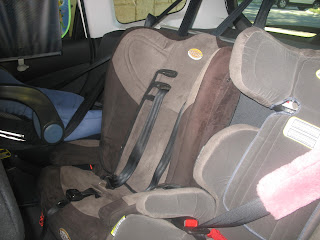 It is a tangible reminder that I should definitely stop at three.  Because even though I have been willing it for the past few months, I haven't had that epiphany, that sudden dawning that This. Is. It.  And that scares me.﻿

So why the plastic bag?

This is one of many plastic Woolies bags that used to sit on the passenger seat during the first five months of this pregnancy.  Bags I would vomit into if necessary while driving The Curly Mop to daycare or The Blonde Bombshell to Kindy.

One day it blew out of the car and up into the tree, where it has been hanging, slowly disintegrating, over the past few months.  I should probably note that I hadn't vomited into this particular bag, because that would be gross.

For the past four months I have been feeling great, maybe not quite the glowing earth mother, but certainly operating at a functional level.  Yet this bag has been a constant reminder that I wasn't always well, and there were days with this pregnancy when I wondered what the hell I was doing, and doubted I would make it to the end.

And so the bag has been quite useful in its way. As long as it is there, it helps me remember the parts of pregnancy that aren't so fun.  It would seem that women's bodies (and brains) have a knack of forgetting all the bad stuff associated with pregnancy and childbirth.

We forget all the fluids: how we pee a bit when we laugh, how every mucus membrane operates at maximum. We forget about the blood noses, the runny noses, the blocked noses.

We forget about the varicose veins in places we don't want to talk about, how we can't poo, how we can't breathe.  We forget the heart burn, the hemorrhoids, the fact that everything tastes like cheese.

We forget that we can never get comfortable.  That our favourite couch is now a death-trap, stuck for hours before someone comes home to pull you out.  We forget about the pins and needles, the numbness, the throbbing.  Bra's don't fit, undies don't fit, shoes don't fit: but to go around naked would be a crime against humanity.

We forget that a bottle of wine at the end of a bad day is a distant memory, that half the items on the menu are now on the 'no-go' list.  We forget that if we get sick or a headache, that the majority of medications are now on the black list: we are stuck with paracetamol while our man-flu suffering husbands are allowed a whole pharmacy of exotic and effective drugs.

We forget that eventually the baby has to come out somehow.  Of a Very.  Small.  Hole.

So while that bag remains in the tree, it will hopefully act as a reminder.  When I come home with my new baby, when I find myself hopped up on hormones, staring at its little face with complete love and devotion, that bag will remind me that stopping at three is a good thing.

After all, there is no room in the backseat for another, and be damned if I'm buying a Tarago.

Posted by Shannon Meyerkort at 12:03 PM