Imelda - Eat Your Heart Out

I am planning on taking the Blonde Bombshell, Miss Curly Mop and Baldy Baby to a farm this Anzac Day.  Spending the day with tractors, mud and animals sounds pretty patriotic to me.  Afterall, before the wealth of minerals were discovered, this country was founded on the sheep's back, right?

Whatever, this post is about shoes not sheep, and it was time to dig out the Wellies.


Unlike the kids clothes which have been sorted and packed away in enormous plastic tubs according to size and season (OCD anyone?) the shoes have been flung in various corners of the house, shoved into plastic bags, empty nappy boxes and other dark places for the past four or so years.

So, about fifteen minutes before we were due to leave for a birthday party yesterday seemed liked a good time to start sorting shoes. Another bad habit learned from my kids.


Starting with the baby pre-walkers, through the darling little size 3 sandals, up through the size 6 mary jane canvas slip ons, to the big girl size 10s, the shoes kept on coming. Almost 60 pairs of little girls shoes, each representing a stage, a memory. 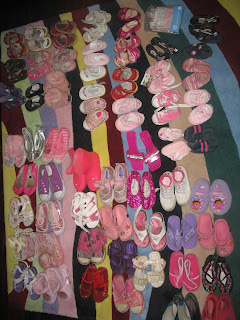 I found an old pair of the Bombshell's wellies for the Curly Mop to wear.  Unlike her current glittery pinkness, when she was two the Blonde Bombshell was a bit of a tomboy and totally into Thomas the Tank Engine.  These were her favourite shoes, and she wanted to wear them everywhere. Including bed. 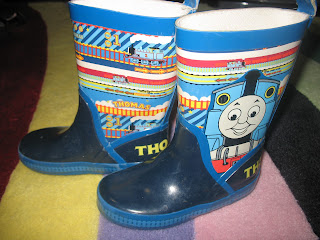 It was a useful phase.  Thomas taught her colours and numbers.  It also means that we actually have some toys that boys might want to play with when they come to visit.  Because for some reason boys don't seem to want to dress up Barbies and play with Dora.

Then I found these pink and brown Argyle shoes.  I loved them so much the first time, I went back to the shop and bought them in another size.  I wish they made them in my size.  The Curly Mop currently wears the smaller pair.  For some reason they make my heart sing. 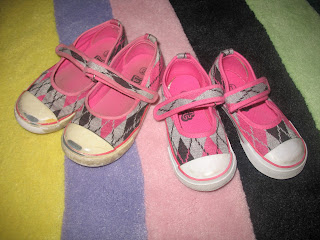 Of course, these pint-sized Converse baby sneakers also rate highly.  As a teenager and in my early 20s, I wouldn't leave the house without a pair of vintage Converse, so these bring back a whole host of memories. 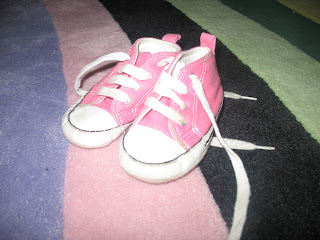 The Bombshell then came in and wanted to know what I was doing.  I asked her to choose her favourite shoes.  Naturally she chose ones that were pink and shiny and not really shoes, but those hideous, ankle-breaking plastic things you find in the dress-up box.  I thought I had hidden them.  It would seem hiding shoes in the shoe box isn't really hiding them... 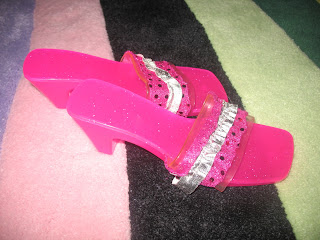 What are your favourite shoe memories?

Posted by Shannon Meyerkort at 2:55 PM

Email ThisBlogThis!Share to TwitterShare to FacebookShare to Pinterest
Labels: Miscellaneous