Why Am I Crying?

It was her big day and we were running late.  Early December, yet it was bucketing down, thunder punctuating my fingers tapping on the dash as we headed to Kindy.

It was the day of the Kindy Christmas concert.

The Curly Mop was dressed in a brand new pink gingham dress, a Christmas tree clip in her curls.  Dad [on a rare day off work] was wearing a green t-shirt and sported reindeer antlers, a video camera dangling from his wrist.  We were the last to arrive, all the tortuously small chairs lined in neat rows, oversized bottoms squeezed in.  Every second person had a digital camera.

The Kindy class were sitting patiently at the front of the room, reindeer antlers made out of hand prints strapped to their little heads.  Straining to see their parents, waving at cameras.  The anticipation was palpable.

The teacher started the CD player and all the kids jumped up and started dancing manically.  20 video cameras shot up in the air in unison.  Younger siblings loitered around the cake table.  The Blonde Bombshell jumped from side to side and waved her arms with a massive grin on her face.  The reindeer antlers on the girl behind had slipped over her eyes, and she was facing the wrong way.

The music finished and the kids all fall to the ground.  Parents and grandparents clapped like they had just witnessed the best thing they had ever seen.  Which we just had.  I was feeling quite teary.  It must be the pregnancy hormones.

Next up, an Australian version of Jingle Bells.  'Dashing through the sand, in our bathers and our thongs...'
The Bombshell had been practicing for weeks.  She never quite got the lyrics correct, always mixing the traditional and the modern versions, slurring over 'one-horse open sleigh' which probably doesn't make much sense to a four year old living in Australia in the 21st century.  I never corrected her, as it was supposed to be a 'secret'.

On the chorus they all pulled out bells and madly waved them around.  The lyrics were drowned out, but the smiles got even bigger.  For the big finale, Six White Boomers.  The would sit down for the verse, then get up and start jumping (like a boomer*) for the chorus.  The sound of 20 children jumping (almost) in unison rivalled the thunder outside.  The sound of 40 adults clapping was almost overwhelming. 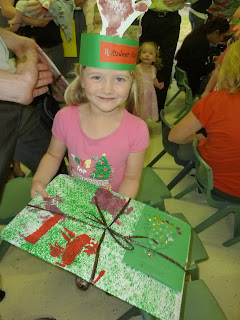 Then it was over.  I don't know who felt prouder, the kids or the adults.  I felt like crying.  Then they each presented us with a handmade calendar, wrapped in handmade paper and decorated with a handmade card. The children were herded outside for fruit, while the adults enjoyed morning tea made by the kids.  Last week The Bombshell had told me they had made 'fluffy white balls with lots of onion' for the morning tea.  Onion?  Hopefully she meant coconut.